1.         If I am injured in a subway, bus or train accident do I have a right to sue the public transportation authority?

Yes, very strict time limits.  The time limits vary depending on the public entity that is responsible for your injuries.  In many instances, you must file a notice of claim and attend a hearing before you can start the lawsuit.  Time periods to file can be very short.

A court has the authority to dismiss your proposed lawsuit forever even if you file it one day late.  While there are exceptions made by courts at times, you never want to be in a position that you need court permission to file a late claim.

4.         What if my injury seems mild at first, but develops into something more serious after the filing deadline passes?

Generally speaking, you would be out of luck in bringing a lawsuit.  You should protect your rights at the earliest stage after your accident by consulting an attorney experienced in suing public entities like the City of New York , , the New York City subway system (the New York Transit Authority), Amtrak, Metro North, the Long Island Railroad, etc.

5.         Can I only sue the proper public authorities if I get injured on a bus, subway, ferry or train or can I also sue them if I am injured on their property?

Both.  If you can prove negligent operation of a subway, bus, ferry or train caused your injuries you may sue the proper public authority.  Also, if you are injured due to falldown from a defective condition (broken steps, ice and snow, falling ceilings, etc.) at a subway station, bus stop, ferry terminal or train station you may also sue the proper entity in a personal injury lawsuit.

6.         Someone told me it is very hard to win a case against the City of New York, New York City Transit Authority, Long Island Railroad, Metro North, Amtrak and other public entities.  Is that true?

The truth is that every negligence lawsuit for personal injuries and medical malpractice is won or lost on the particular facts of the case.  This is as true when you sue the City of New York as when you sue a private citizen driver or building manager.  Special laws may apply to public entities which is why you want to consult an attorney experienced in suing public authorities for money damages in personal injury lawsuits.

Generally speaking, yes.  Due to the volume of such suits, administrative back logs in the court system and the bureaucracy of large agencies and the City of New York, such lawsuits tend to move slower than cases against private persons and companies.  You need a lawyer experienced in navigating the maze unique to cases against public authorities and entities.

8.         If the bus or train was only partially at fault and another vehicle was also at fault,  do I still have a case against the proper public authority?

Yes.  In cases of comparative negligence, if the case goes to a jury trial the jurors will decide what percentage each party was at fault, if at all.

9.         If I was one of many passengers hurt on a bus, subway or ferry, will all of the passengers have separate lawsuits in separate courts?

Yes and no.  You will have your own lawsuit with your own lawyer but, with some exceptions, when multiple passengers sue a public authority (MTA, New York City Transit Authority, Amtrak, City of New York, Long Island Railroad, Metro North, etc.), the court will order that all the cases be consolidated before one judge for purposes of discovery (pre-trial document exchange, depositions, etc.) and will order that the cases be tried jointly before one jury (at least for determinations of fault and separate trials may be ordered before separate juries to decide damages – pain and suffering, lost wages, etc.).

10.       Am I entitled to money damages in a public transportation accident case if I am partially at fault?

Yes.  If a jury finds, for instance, your car and a bus were both at fault for an accident you will likely be able to recover money damages for serious injuries sustained. Of course, you must prove that the negligent conduct of the public transportation driver caused your serious injuries.  Before trial, your lawyer and the lawyer for the public entity may be able to negotiate a settlement which takes into account your percentage of negligent conduct (as a driver or pedestrian) as well as the extent of your serious injuries.  If you are a passenger, it is highly unlikely that you would be assessed any percentage of negligence.

Attorney Advertisement: The contents are for informational purposes only and not legal advice. 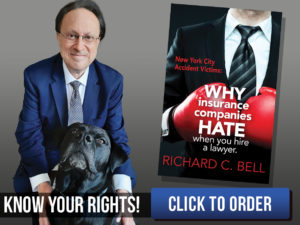 Richard went above and beyond, doing his utmost to get me what was fair for my accident. He has helped my family in the past and we would not go anywhere else!!! Richard is truly the best at what he does and you can rest assured that you and your family are in the best hands. Thanks again for everything Richard!!!